As a member of the New Zealand Army Band, Cameron Burnett, an Ara Music Arts alumnus from 2015 was honoured to be chosen as the ceremonial drummer for both the Dawn Service at Anzac Cove, as well as the New Zealand Service at Chunuk Bair.

As his first time being involved, Burnett says the experience was incredible.

“It is hard to put into words the feeling of standing on Gallipoli for the first time,” he says.

“Taking your shoes off and embracing the wairua in the land and foreshore. Looking at the hills and knowing that many thousands of young men died on them, before their lives even started, leaves you feeling unavoidably moved, humbled and sad.” 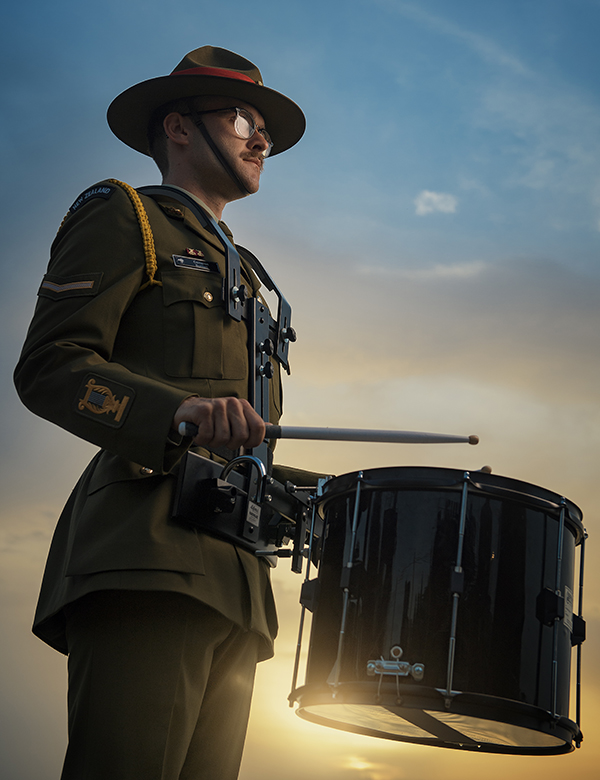 At the commemorations Burnett played a key role as a drummer for a catafalque party; a guard of four defence personnel who stand watch over a monument at a commemorative site.

“To be awarded the responsibility of paying respects at Gallipoli on Anzac Day was the greatest honour of my five-year career with the New Zealand Army Band and truly a highlight of my life so far.”

Since graduating from Ara Music Arts in 2015 Burnett has developed a passion for musical theatre and has been lucky enough to perform professionally in several notable productions.

“Fortunately, this was in the capacity of ‘drummer’, as no-one needs to see my two left feet onstage,” he laughs.

Burnett has played drums for “That Bloody Woman” at the Christchurch Arts Festival in 2015, Auckland Theatre Company and The Court Theatre in 2016, and for their national tour in 2017.

Most recently he was bestowed with the dual roles of Assistant Music Director and Drummer for the New Zealand debut of the Tony Award-winning musical Hedwig and the Angry Inch.

“This was my first time singing onstage and I also got very, very good at smoky eyes and contouring.”

“One week we could be preparing for a big band concert, the next it could be a military parade, the next a schools tour, and before you know it, we're preparing to perform in the Royal Edinburgh Military Tattoo.”

When he’s not drumming, Burnett can be found curating the New Zealand Army Band social media profiles, something which has spurred a keen interest in videography.

“During the first lockdown of 2020, my colleague Marc Ellis and I created Isolation Bubble performance videos of the New Zealand Army Band. These gained us over two million hits worldwide in the first lockdown alone! I think that people really respond to uniformed personnel, being playful, jovial and a little bit silly. During uncertain times it’s good to provide a bit of humour.”

Burnett is a true believer that loving what he does, means it doesn’t feel as much like work.

“I’m in the most fortunate position where I get paid to do what I love. I am a passionate drummer and to do that every day is a real joy.”